THE LEGAL PRACTITIONERS ACT AND THE REALITIES OF MODERN ARBITRATION 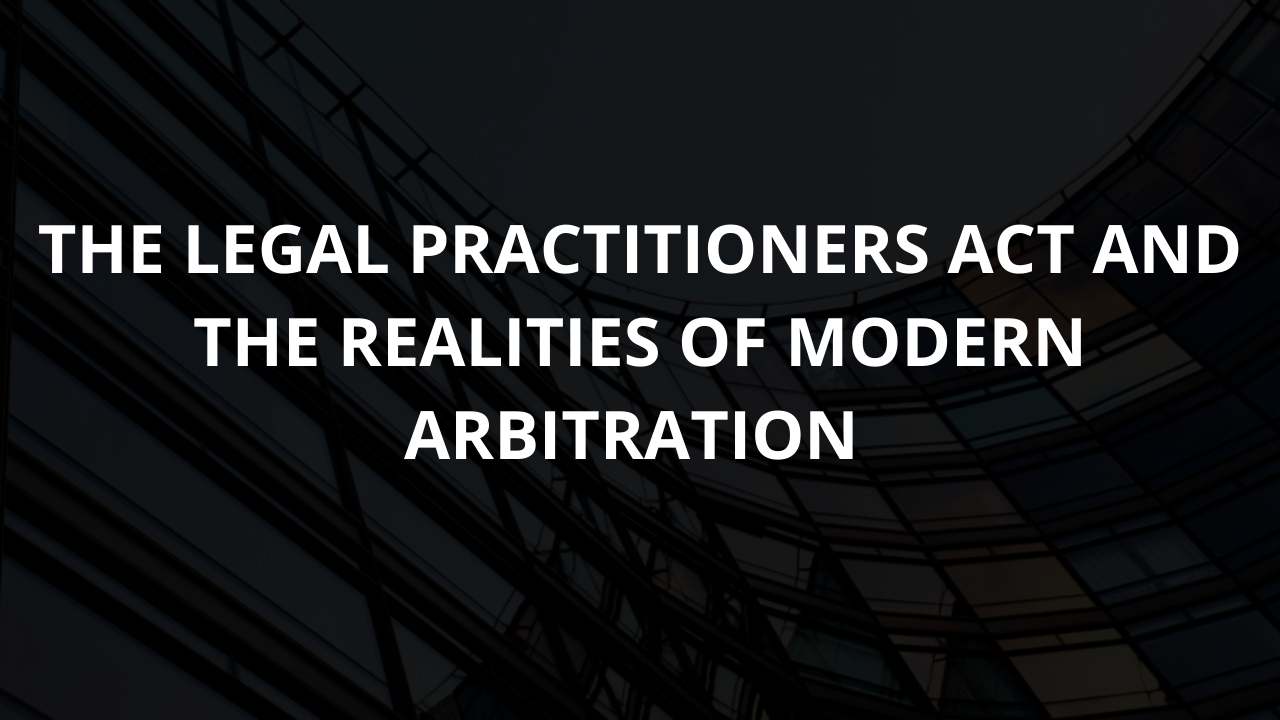 The World is a dynamic place and as it continues to integrate, business and economic transactions have become more. This is not to say that countries and states have loosened their grip on their sovereignty, NO, rather countries may have to be ready to accommodate others if the world is going to be one big, prosperous place. International and domestic trade naturally comes with disputes, and as such laws and lawyers need to be very flexible to accommodate this reality.

WHO IS A LEGAL PRACTITIONER?

The Legal Practitioners Act CAP L.11 Laws of the Federation of Nigeria (2004) (“LPA”), as amended in 2014 defined who a Legal Practitioner is in Nigeria, the LPA gave a rather restrictive definition, in Section 2(1) of the Act

“Subject to the provisions of this Act, a person shall be entitled to practice as a barrister and solicitor if, and only if, his name is on the roll.”

Section 24 of the Act, further defines “Legal Practitioner” as:

“a person entitled in accordance with the provisions of this Act to practice as a barrister or as a barrister and solicitor, either generally or for the purposes of any particular office or proceedings”

The phrase, “on the roll” from the foregoing, would mean the roll in Nigeria.

The Supreme Court in Okafor v. Nweke[1] Per Onnoghen, JSC, had this to say in giving the meaning of a Legal Practitioner;

Put differently, the above provisions would mean that once your name is not on the roll in Nigeria or you have not been given a warrant by the Chief Justice to practice for the purposes of a particular proceedings, you cannot practice as a legal practitioner in Nigeria.

What then happens to the voluntariness to choose who represents a person in an arbitral tribunal?  especially in situations where the dispute arose from commercial transactions / international trade investments and parties decide to use expatriates as their arbitrators? Bearing in mind that Article 4 of the Arbitration Rules of the Arbitration and Conciliation Act (“ACA”) provides that:

“The parties may be represented or assisted by legal practitioners of their choice….”

A collective read of the provisions of the ACA can however repress the fears of foreign investors. Section 57(2) paragraph (d) of the Arbitration and Conciliation Act provides for circumstances in which an arbitration in Nigeria will be considered international.

“(2) An arbitration is international if –

(d) the parties, despite the nature of the contract, expressly agree that any dispute arising from the commercial transaction shall be treated as an international arbitration.”

Again section 53 of the ACA does not make it mandatory that parties to an arbitration must be represented by a Local Arbitrator where parties agree to conduct their arbitration as one that is international. It states thus:

This provision allows parties to incorporate the UNCITRAL Arbitration Rules or any other Rules into their agreement as the rules applicable to the arbitration.

The UNCITRAL Arbitration Rules (2010) provides in Article 5 that:

Thus, a collective read of all of the above provisions evidences the beauty of arbitration and party’s liberty to choose a counsel and terms of agreement. Which explains why it is the most adopted for the resolution of conflict that arise from commercial and investment disputes.

Consequently, where parties to an arbitration in Nigeria seek to be represented by a  foreign counsel not caught within the definition of ‘legal practitioner’ under the Legal Practitioners Act, the only way their aim can be achieved is for them to agree to designate their arbitration as international, which under the ACA, can be done by simple agreement. The parties will also need agree to the incorporation and applicability of the arbitration rules to the proceedings and such rules will have to go further than simply stating that a party can be represented by a ‘legal practitioner’.

It is important to always have a clear-cut principle and position of law. Thus, it is important to amend the law (LPA) to exempt arbitrators from its rigidity, possibly by extending the said sections of the LPA to include an exception in instances where parties to an arbitration appoints a person(s) whose name is not on the roll in Nigeria to constitute an arbitral tribunal.

While it is understandable that the LPA is protecting the jobs of Nigerian-trained lawyers, it is also shutting the doors to more economic prosperity as well as the exchange of resources and ideas.