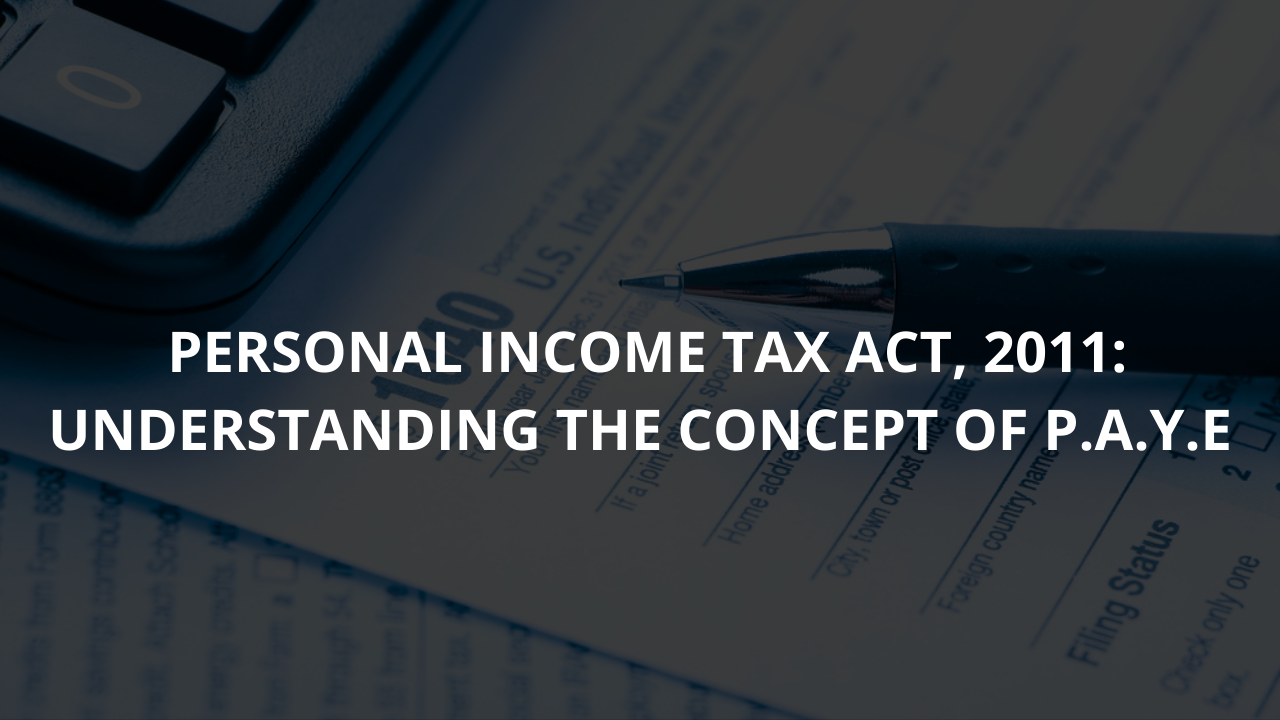 A tax is a compulsory financial charge or some other type of levy imposed on a taxpayer (an individual or legal entity) by a governmental organization in order to fund government spending and various public expenditures. A failure to pay, along with evasion of or resistance to taxation, is punishable by law.[1]

In Nigeria, certain laws regulate and provide for the various taxes to be remitted to the government. In this article, we will analyze the concept of PAYE, deductions allowable and the benefits of paying one’s tax to the government of Nigeria.

Section 2 (1) (a) of the Personal Income Tax Act[2] (Hereinafter referred to as “the Act”) provides every individual other than persons covered under section 2(1) (b) which includes; persons employed in the Nigerian Army, Nigeria Navy, Nigeria Air Force, Nigerian Police Force other than in a civilian capacity, officers of the Nigerian Foreign Service, residents of the Federal Capital Territory and persons resident outside Nigeria who derives income or profit from Nigeria shall for each year of assessment remit tax to the relevant tax authority in a State who shall have the power to collect such tax.

This is to say, in every State, there exist a relevant tax authority for which shall be responsible for collection of tax assessed to an individual.

Pay as you earn as the name connotes, is tax paid by an employee after certain deductions allowed by law has been assessed. Section 81 describes PAYE as Income chargeable on an employee by an assessment whether or not the assessment has been made, and which shall, if the relevant tax authority so directs, be recoverable from any emolument paid, or from any payment made on account of the emolument, by the employer to the employee.

It is therefore necessary, to state that PAYE is paid by a person who is in a paid employment. Although there exists an exception provided for in section 43, wherein a person… whose only source of income in any year of assessment is employment in which he earns N30,000 or less from that source… is not required to file a return.

When then is it said that an employee’s income is subject to Tax in Nigeria?

If the duties of his employment are performed in Nigeria and if the employer is in Nigeria or has a fixed base in Nigeria.[3]

With regards P.A.Y.E, Section 3 (1) (b) of the Act, describes Income chargeable as tax payable for each year of assessment on the aggregate amounts each of which, is the income of every taxable person[4], for the year, from a source inside or outside Nigeria from “… any salary, wage, fee, allowance or other gain or profit from employment including compensations, bonuses, premiums, benefits or other prerequisites allowed, given or granted by any person to any temporary or permanent employee other than so much of any sums or expenses incurred by him in the performance of his duties, and from which it is not intended that the employee should make any profit or gain”.

To ascertain a tax payer’s chargeable income, the total income of an individual for the year of assessment is expected to have undergone the exclusion of legal income exemptions and allowable deductions. That is, the Act provides that some income are exempted from tax as well as certain allowable deductions are to be deducted from the total income in other to arrive at an individual’s chargeable income.

For an employee, deductions allowed includes; a contribution to a pension, provident or other retirement benefits fund, society or scheme, recognized under the Pension Reform Act which is minimum of 8%[6]; Deduction of 10% of gross rent allowed for a person under the Pay-As-You-Earn system.[7]  Such amounts are deducted from the total income in other to arrive at the ascertainable chargeable income from which the P.A.Y.E to be remitted to the government is derived.

The Act[8] provides for specific rates by which tax is assessed and payable on the chargeable income of an individual as this is specified in the Sixth Schedule. It states that, “A graduated Tax rates with consolidated allowance of N200,000 + 20% of gross income, subject to a minimum tax of 1 per cent of Gros income whichever is higher. After arriving at that,

After an individual’s tax has been assessed, the requisite point of filing is at the relevant tax authority in the employee’s State of residence[9] which is usually the State’s Internal Revenue Service (IRS).

The tax authority issues a tax clearance certificate to a person who requests and wherefore, in the tax authority’s opinion, such a person has fully paid assessed tax on his income for a period of three years preceding the current year of assessment. It is also the position of law, that the payment of current year tax shall not be made a condition for the issuance of the certificate unless the applicant is leaving the country finally.[10]

BENEFITS OF PAYING YOUR TAX

A person who files a return of tax assessment on his income within the time specified and there is no default in the payment arrangement, such person shall be granted a bonus of 1% of the tax payable.

Also, at point whereby he is required during application any or all of the provisions set out in Section 85 (4) (a-v) he will readily have access to demand a tax clearance certificate as evidence of the fulfillment of one’s civic responsibility.

Irrespective of the legal imposition fixed on taxation in a country, it is the basic rationale that revenues generated from tax are used in turn to finance the projects applicable and beneficial to its citizens. Also, the Government set in place certain policies such as the National Housing Fund scheme, The Pension Fund Scheme, The Social Insurance Trust Fund and others that would help secure health, housing and financial security for its working populace.

Like it is often said, a true Nation is one whose Government is of the people, for the people and by the people. And so, it takes but the efforts of the Government and its citizens to safeguard the social and economic welfare of the country.

Previous Article: THE PRINCIPLES OF DATA PRIVACY AND DATA PROTECTION IN NIGERIA
Next Article ESCROW FUNCTIONS IN SMART CONTRACTS