ARBITRATION IN NIGERIA: AN EXPOSÉ ON ITS COST AND EXPENSES 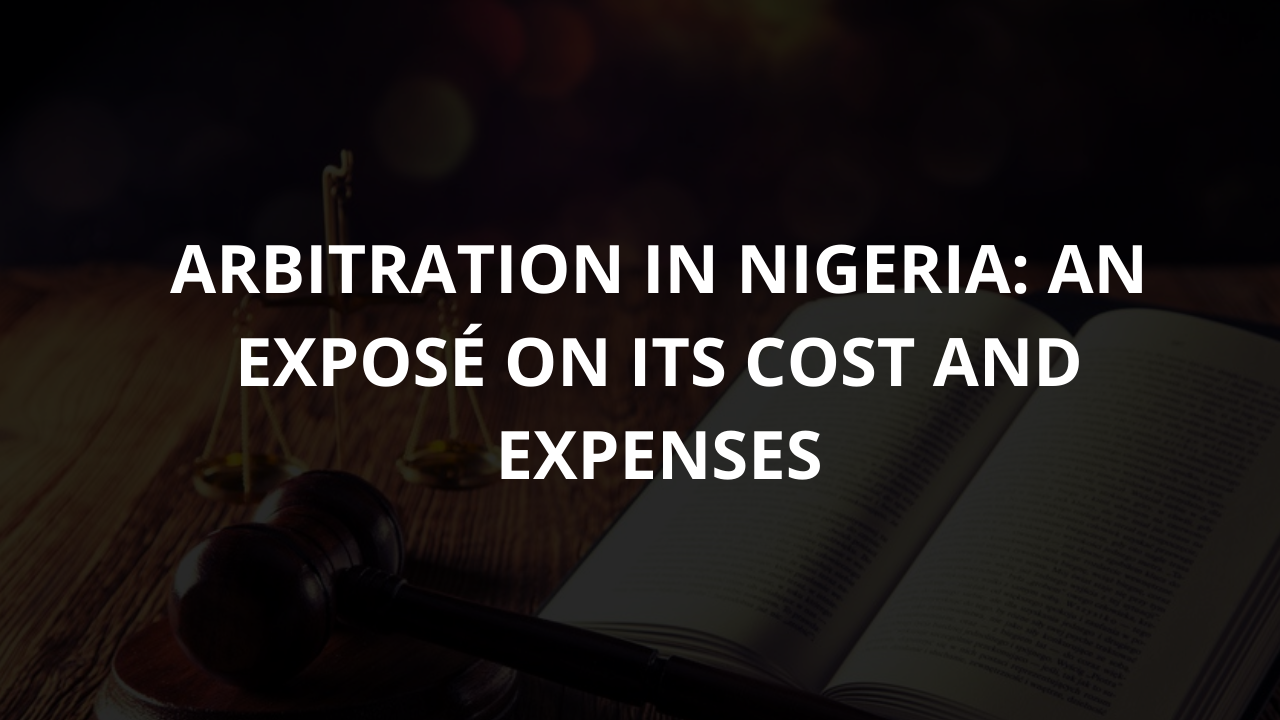 THE COST OF ARBITRATION.

In simple vocabulary, cost is the amount of money required to be paid for something.[1] However, in legal terms, cost refers to the amount of money spent in pursuing a legal action, especially those expenses that the losing party may be required to pay.[2]  The cost of arbitration includes the fees of arbitrators and the expenses reasonably incurred in connection with the arbitration as well as its administrative charges, which would be borne by the parties. The issue of cost is very crucial in arbitration as parties in dispute may not only bear their own cost but their counterparts’ legal costs and other expenses.

There are two components of cost in arbitration, which includes;

The method’s used by arbitral institutions in fixing costs include;

LEGISLATIONS REGARDING COSTS IN ARBITRATION.

The principal legislation that governs arbitration in Nigeria is the Arbitration and Conciliation Act (ACA).[7] Section 49 subsection 1 paragraph (a) to (e) of the Act makes provision concerning cost. It provides thus;

Also the International Chamber of Commerce (ICC) Rules of Arbitration[8] in Article 38, paragraph 1 states that:

The Lagos Court of Arbitration Rules[9] as well in Article 42 stated in paragraph 1, that:

“The term “cost” includes only:

“The Arbitral Tribunal, in consultation with the Director of the Centre, shall fix the costs of arbitration in its award. The term “costs” includes:

(a) The fees of the Arbitral Tribunal;

(b) The travel and other expenses incurred by the arbitrators;

(c) The costs of expert advice and of other assistance required by the Arbitral Tribunal;

(d) The travel and other expenses of witnesses to the extent such expenses are approved by the Arbitral Tribunal;

(e) The costs for legal representation and assistance of the successful party if such costs were claimed during the arbitral proceedings, and only to the extent that the Arbitral Tribunal determines that the amount of such costs is reasonable;

(g) The expenses reasonably incurred by the Centre in connection with the arbitration, as well as the Registration Fee and the Centre’s Administrative Charges. Any facilities made available by the Centre itself may be charged for on a comparable basis. All such expenses, fees and charges, and the costs of any facilities provided shall be fixed by the Director of the Centre.

Lastly, the Janada Centre for International Arbitration and Mediation provides under Article 47 (1) a-f of its Arbitration Rules, 2020[11] for cost that;

The term “costs” includes only:

a) The fees of the General Manager of the JICAM and the Arbitral tribunal to be stated separately as to each arbitrator and to be fixed by the tribunal itself in accordance with the scale of fees in force at the time of the commencement of the arbitration;

b) The reasonable travel and other expenses incurred by the arbitrators;

c) The reasonable cost of expert advice and of other assistance required by the Arbitral tribunal;

d) The reasonable travel and other expenses of witnesses to the extent that such expenses are approved by the Arbitral tribunal;

e) The legal and other costs incurred by the parties in relation to the arbitration to the extent that the Arbitral Tribunal determines that the amount of such costs is reasonable; and

From the above provisions, it is evident that in the course of an arbitration proceeding, parties will be liable for the arbitrator’s fees and expenses, the arbitration institution involved, and legal costs. In the case of Corona v. Amherst Partners[12], it was held that the demanded fees by the arbitral tribunal should be reasonable and not outrageous.

The fees of the arbitrator(s) depend on several factors, which include:

The practice of allocating costs and attorneys’ fees between the parties to a dispute can be traced to Roman law, where the practice of requiring the losing party to pay the winning party’s costs developed. Interestingly, in early ecclesiastical courts there were no fees for legal advice. However, under legis actio sacramentum, litigating parties deposited a sum of money in court to ensure legal proceedings were initiated with good cause. After the action, the deposit was refunded to the prevailing party, but the deposit of the losing party was forfeited to the temple.

In the case of Ladega v Akiyili[19], the court was of the view that the objective of awarding cost is not to punish the unsuccessful litigant but to compensate the successful party for the expenses to which he has been put by having come to court. This position held by the court applies to arbitration. However, there are instances where the arbitrator may depart from applying this general principle of cost following the event. The arbitrator however uses his discretion in engaging in this crucial departure. In the case of Latoudis v Casey[20], Justice Dawson described the discretion as ‘unqualified’, Justice McHugh J described it as ‘uncontrolled’, and Chief Justice Mason described it as ‘unconfined’. Be that as it may be described, it has been held that such discretion must be exercised judicially.

The arbitrator usually considers a lot of issues and factors surrounding the arbitral proceedings before using his discretion to depart from the general rule that cost must follow the event. The arbitrator takes into consideration

Under the ICC, when the request for arbitration is received by the secretariat, each request to commence arbitration must be accompanied by a filing fee of US$ 5,000. Such payment is non-refundable and shall be credited to the claimant’s portion of the advance on costs. Then, the arbitration will be submitted to the scales for an amount in dispute to be calculated by the cost calculator. It does not generate an estimate of the arbitrators’ expenses (i.e. disbursements). The procedure the parties choose either, ordinary or expedited, and also the number of arbitrators will be considered during calculations. For the arbitrator’s fee under the ad valorem system, the ICC Rules set a minimum and maximum amount.

The tables below reveal arbitration costs based on ICC’s Standard Scale.

The result will provide an estimation of the advance on costs that may be fixed by the Court. Due to the rounding of figures, the estimate may vary slightly from the amount resulting from the application of the scales published in Appendix III to the ICC Rules of Arbitration. However, the Court is free to and regularly does, fix arbitrator’s fees an amount higher or lower than the average. The estimation has no legal implications and should not be considered as necessarily reflecting the Court will fix in any given case.

Under the NCC-DRC Rules of 2019, cost and expenses in arbitration are calculated in administrative expenses on the amount in dispute, and the arbitrator’s fees either on time (a daily rate of NGN 500,000 or an hourly rate of NGN 60,000) or ad valorem.

The tables below reveal the arbitration cost based on NCC-DRC’s Standard Scale:

The Lagos Court Arbitration determines the exact fee by considering the arbitration’s specific circumstances, such as complexity of the case, the arbitrator’s experience, and the scheme under which a party initiates the arbitration (i.e, the Small Claims, Expedited and Standard). It calculates the administrative fees on the amount in dispute (ad valorem system) and the arbitrator’s fee based on a daily rate or hourly rate.

The tables below reveals the arbitration cost based on LCA’s Standard Scale:

The Centre calculates the arbitrator’s fees and administrative charges using the ad valorem system. Unlike the LCA, RCICAL appears to use separate scales for sole arbitrators and tribunals involving multiple arbitrators. The Rules set minimum and maximum fees in this regard. RCICAL’s administrative charges consist of a registration fee (USD 750) and ad valorem Secretariat fees. RCICAL designates its fees and costs in USD. Parties may presumably make NGN payments at the relevant CBN at the payment date.

The tables below reveal the arbitration cost based on RCICAL’s Standard Scale:

ARBITRATOR’S SCHEDULE OF FEE’S FOR A SOLE ARBITRATOR

The tables below reveal the arbitration cost based on JICAM’s Standard Scale:

In conclusion, it is established that in the course of arbitration proceedings costs are incurred whether administrative or the arbitrators’ fee. Costs are mostly incurred because of the decision of the parties on whether to contest the issue between them or not, the amount of the dispute in question and how many arbitrators the parties want. There appears to be several similarities in fees from arbitral institutions in Nigeria and when a party decides to contest their issue, they should first set out a budget for the arbitration while considering the best arbitral institution for the dispute. Parties must also ask the question “do the benefits of that particular arbitration institution outweigh its costs?” If that can be answered, then parties can proceed to arbitration.

[18] Identical with Article 38 and 40 of the United Nations Commission on International Trade Law (UNCITRAL), Arbitration Rules 1976. 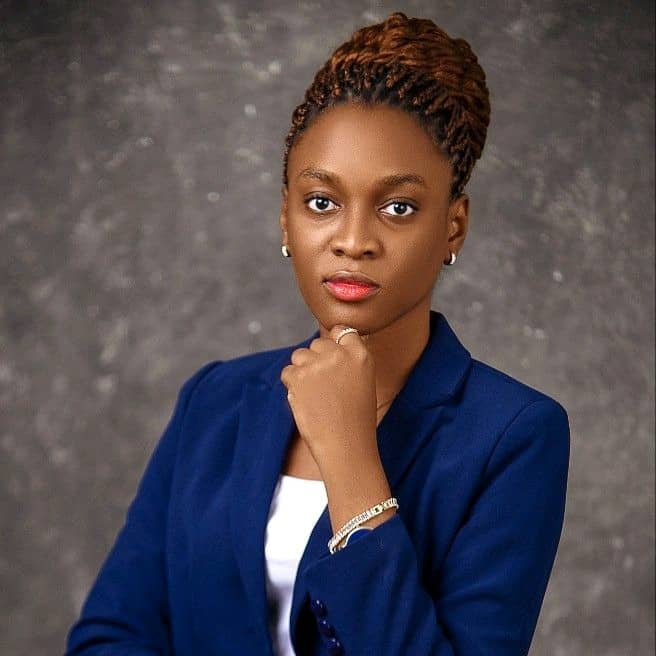 Victory E. Oaikhena is a Junior Associate with Marcus-Okoko & Co., and specializes in Aviation Law, Arbitration, and Regulatory compliance